The first rabbi to be featured on Time magazine, the article describes Finkelstein as follows:

“There is no one spokesman for U.S. Judaism, no central authority, no High Priest. All good Jews, in varying degrees of literalness, believe in the Law, but U.S. Judaism is a spectrum shading off by minute gradations from ultra-orthodoxy to ultra-modernism. In this spectrum, Finkelstein, a traditionalist with one keen, dark eye on the future, stands at the center.”1 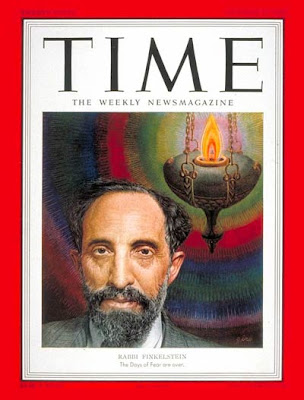 The two renowned Louises were close both personally and academically, dating back to Finkelstein’s days as a rabbinical student at the Seminary. Finkelstein, who was a rising star in his days as a student, as well, was the first JTS student to receive the traditional rabbinic semikha (ordination) of Hatarat Horaah. Ginzberg examined Finkelstein for the exam.2

Ginzberg’s brilliance is the likes of few individuals of the past century. His masterpiece Legends of the Jews synchronizes all of Rabbinic midrash into a continuous narrative — and he did so before the computer was even conceived of. During a tour of the Penn library’s Jewish and Near Eastern Studies Room with my class on the Passover Haggadah (JANES is on the 4th floor in the back, if you’re curious), Professor David Stern pointed us to the six-volume set and declared that what took Ginzberg ten years to write would have taken any other person two lifetimes. 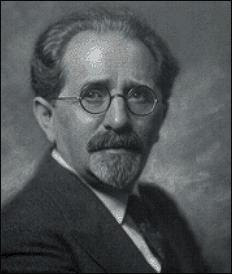 Ginzberg’s photographic memory and propensity for logic extended beyond the Jewish cannon. Following Albert Einstein’s arrival to the United States, Ginzberg engaged the physicist in both an academic and collegial relationship. Ginzberg’s ability to discuss math with Einstein was so great that it led him to think that he was the JTS professor of math!

“In all innocence, Einstein asked [Seminary chairman] Judge [Iriving] Lehman why the Seminary needed a department of mathematics,” Finkelstein recalled in a retrospective on Ginzberg’s life. “He got the impression from the conversation that Professor Ginzberg’s specialty was mathematics.”3

Among his many academic accomplishments, Ginzberg was the first Jew to receive an honorary doctorate from Harvard University, an honor he addressed as follows:

“I would have felt very sad if they would have ignored ‘Judaism’ or would have asked a so-called ‘representative’ Jew to represent Judaism. I am very happy that neither case happened; as far as I am concerned I am of course glad but not particularly so. I never craved for ‘fame’ which means a desire to be known by them who do not know you.”4


Throughout it all, Ginzberg was first and foremost a rabbi and religious Jew, seen in the title of his biography, Keeper of the Law. Rabbi David Golinkin's collection of his legal responsa illustrates the priority he put toward halakhic decision-making.

While Finkelstein’s influence stretched well beyond the walls of the academy, his intellectual acumen intimately affected both the scholar and the lay-person.

While in rabbinical school at JTS, Rabbi Alan Lucas did a favor for the Chancellor, and Finkelstein offered him a book a copy of The Jews as a thank-you. Rabbi Lucas responded that he already had a copy of The Jews, but would love a copy of the Sifrei (the Tannaitic midrash), if that would be okay. He then asked if Finkelstein would sign the copy.

“If you had asked for a copy of The Jews, I would have signed it for you,” he said. “But I didn’t write the Sifrei!”

And a sense of humor, to boot.

Even physically, he was a towering figure over American Judaism. An unofficial second-in-command at the Seminary during the thirties, he was the clear successor to Cyrus Adler, assuming the role of President of the Seminary in 1940 (the title chancellor would officially be given in 1949; he served as the leader of the institution until 1972).

A full biography of both Ginzberg and Finkelstein takes a book, and those books are well worth the read (Louis Ginzberg: Keeper of the Law and Louis Finkelstein and the Conservative Movement: Conflict and Growth). For now, some of my own reflections.

In 1950, Finkelstein dubbed the decade “more miraculous” even than the Exodus from Egypt, with “the manifestation of the Deity readily… discerned in almost any aspect of the downfall of Hitler.”4 So he placed religion in modern society — a dynamic engagement with the modern predicament.

Directly after one of the biggest public relations disasters in the history of the world, Finkelstein mandated a joining of disparate parties, particularly across religious spheres, to discuss and engage the problems of humanity.

Thus Finkelstein proposed a meeting of all groups in the community of Israel, because this moment in time particularly mandated it:

“I do know that if the participants are well chosen; and that if they are moved (as if properly chosen they inevitably would be) with the tragedy of all mankind, divided through barriers of misunderstanding, they will find a way to progress toward team-thinking; and with that toward appreciation of the real problem of our age – that of realizing the greatness of its potentialities, the miracles it has witnessed and the manifestation of God that has been granted it.”6

He manifested these goals nowhere more than in the symposia on Science, Philosophy and Religion. In the first ten years of the program, beginning in 1939, Finkelstein chaired conferences on the following subjects: Approaches to World Peace; Approaches to National Unity; Approaches to Group Understanding; Conflicts of Power in Modern culture; Learning and World Peace; Goals for American Education and Perspectives on a Troubled Decade.7 The names alone indicate how Finkelstein sought to bring together people from across faiths and backgrounds during a decade that he judged to be more tumultuous than any in the history of mankind.

In this vein, perhaps this quote manifests Finkelstein’s values more than any other:

“The era of isolationism is at an end, whether it applies to the isolation of nations, of peoples, or of cultural spheres…There can be no religious piety without social justice, no lasting economic prosperity without the sense for the spiritual, no political stability without compliance with moral principles. There is one God, one mankind, one law. The spirit of life is indivisible…

This reorientation is long overdue. The effort to effect it began with the birth of Judaism and it is of profound significance that the overwhelming insight into the need of such reorientation should come with a war which has brought the Jewish people unparalleled sorrow…

The problems of the ethical and social life transcend any group. Cooperation among scholars of all faiths concerning such problems is part of the Jewish tradition. We deem it appropriate to seek the clarification of the philosophical and moral problems in our time, insofar as they affect all men and require skills to be found in all groups, through cooperation across all differences and boundaries. We shall seek to further this cooperation because we believe that it can only lead to the deepening of our faith in Judaism, to the deepening of devotion to the true spirit of the Prophets among out neighbors.”8

Finkelstein was at the forefront of the underlying thesis which I have outlined elsewhere, that religion inherently was a moral force in the world, and that the manifestation of Nazism related the uniform failure of all religions to activate their moral norms. In plain terms, if religion had been doing its job, World War II would not have happened. Thus, as the leader of the Seminary, both during and after the war, Finkelstein brought together leaders from across the religious world.

“The Seminary must always call attention to the long-range view… it is a grave matter to enter a war, without adequate military preparation; it may prove fatal to come into peace, without moral and religious preparation. It is with these thoughts in mind… that this Seminary has undertaken various talks looking toward the increase of understanding among various faiths, and also among the various intellectual disciplines, with a view to strengthening the moral and spiritual fiber of the American people. We realize that Judaism as a faith can survive only in an atmosphere of general faith.”9


In 1955, sociologist Will Herberg published his manifesto Protestant, Catholic, Jew, a testimony to the status to which Jews had risen in American civil life.1010 With synagogues across the suburban landscape of America and Finkelstein’s presence shining forth from 3080 Broadway, Conservative Judaism was at the center of that Jewish presence with the surrounding religious community. And perhaps the title of Herberg’s book manifests the Jews place in American society best: Herberg situated Jews in America alongside Protestants and Catholics as one of three contributors to the “American Way of Life.” Throughout American Jewish history, Jews had to struggle with the dialectical tension of acculturating into the American community while retaining a traditional Jewish life. Now, however, Herberg suggested that it was impossible to be American without being Jewish.

Finkelstein strongly believed that anti-Semitism was rooted in simple ignorance of the American populace. Thus, he brought Judaism to America. If Americans knew about the Jewish people, their behaviors and nationhood, they would welcome them as part of the melting pot. The NBC Eternal Light radio television series brought Judaism to the nation, a fact that Kaplan stressed often:

“The time will come when Jewry will be grateful to Dr. Finkelstein for having widened the horizons of Jewish life in the country, and having taught the Jewish people to realize that it must serve the general community and bring to bear the best in its tradition upon the development of the general life about us.”11

As Steinberg stated in a draft of a letter to Goldman:

“Too many movements for the vitalization of Conservative Judaism have died amidst those conferences, round-table discussions, etc. of which Dr. Finkelstein is so fond…. My discontent isn’t something that is to be arbitrate[d]…. And last of all, I want the Seminary to take the lead in making Judaism really historical Judaism. That is to say, both traditional and evolving. I want the Seminary to do something practical about the Jewish law of divorce, about Shabbos Observance, Kashruth, about vitalizing Jewish worship. What else are the Seminary and Conservative Judaism for?”12

The Conservative movement became the most visible Jewish movement on the American scene during the 1950s, both physically and ideologically. The movement manifested a spirit of religious pluralism, and people felt that it fused both Americanism and Judaism into a reality that did not have to sacrifice one ideal for the sake of another. Of course, sociological realities redefined religion during this period, which certainly no longer meant religion in the form of traditional observance.

But for Finkelstein, this era represented what retrospectively appears to have been prophetic revelation. Though he did not talk of the importance of the synagogue, Finkelstein paved an ideology for reciprocal dialogue between America’s religious communities, a condition that would become essential during the suburban life of America’s Jews, who, for the most part, no longer lived next to other Jews.

At least in the fifties, people flocked to the movement, seeking the pluralistic ideology that Finkelstein had established for the Seminary.

8. Statement by the faculty of the Jewish Theological Seminary of America, 1946 in Michael Greenbaum, Louis Finkelstein and the Conservative Movement, (Binghamton, N.Y. : Global Publications, 2001), 67