A note of advice before the core of this post — a recommendation to all, really. Walking home from the Conservative Yeshiva tonight, Ethan and I were looking for a garbage can to throw out the pizza boxes we had taken from the Yeshiva. Good citizens, and whatnot.

The first garbage can we happened upon was at the Schocken Center on Balfour Street — across the street from the Prime Minister's house. We throw out the pizza boxes, walk back to the street and are met by a man showing us his badge.

"What were you doing there," he says in the gruff voice you would expect from a security guard across from Bibi Netanyahu's residence.

The giant gun would have been enough, but thanks for the id, too.

He took us back to the garbage can and asked us to show him the inside of each subsequent pizza box. We then both wished each other a good night. Suppose I should have seen that one coming.

Ethan and I made the requisite jokes about the event after we cleared the security territory. Laila tov, officer, indeed.

The pavement of Israel speaks with each step people take.

The street signs tell a narrative history of the entirety of Jewish nationhood, neighborhood by neighborhood.

We at Bustenai 11/7 live in the neighborhood devoted to the Israeli War of Independence. Our cross-street is 29 November, the day of the U.N. vote for the partition of Palestine.

Voted in the General Assembly of 29 November 1947, there were 33 affirmative votes, 13 against, with 10 abstentions to recommend the division of British Palestine in two, with Jerusalem remaining an international territory, governed by the UN.

Six months later, on 14 May, 1948, (ה' אייר) David Ben-Gurion and what was at the time collection of Jewish upstarts, declared Israeli independence in a Tel Aviv basement — the day before the British were officially designated to leave their favorite Middle East port.

In terms of international recognition, it all started on 29 November. It continues on today.

And it was precisely at this time that international voices said that Israel was handed over on a Silver platter, the namesake for this blog, and my rabbinic name, even. After the Holocaust, what other choice did UN members have? — so goes the argument.

Indeed, as Natan Alterman states both lyrically and assertively, the one percent of the population which fought and died in the Israeli War for Independence (1 PERCENT!), and the remainder of the population that lived through the 1948 war were that מגש הכסף, the silver platter, that upon it a Jewish state was given.

62 years later, people continue to build the state upon the foundations which were laid with the blood, the tenacity of those who dared to dream.

In my neighorhood it is kaf tet b’November on kaf-tet b’November. Just another day in the neighborhood, living the status quo in the land of Israel. 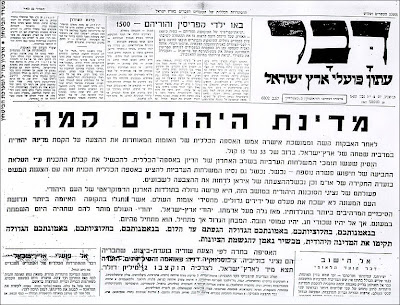