49 days, which equals 7 weeks of the Omer 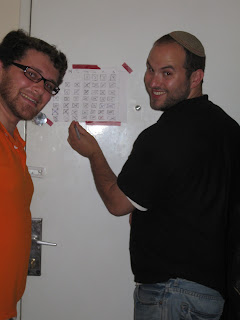 Photo credit: The Dew of God
Happy Pentecost to one and all.
Posted by Zachary Silver at 1:12 AM No comments:

R. Shai Held: Halacha and Innovation are not Mutually Exclusive

In what partly is a response to Rabbi Hershel Schachter's recent remarks and prohibition of the ordination of women rabbis in Orthodoxy, Rabbi Shai Held powerfully articulates a progressive approach to Jewish law as a more authentic world-view than legal conservatism.

An article filled with substance, that can indeed stand on its own (not as a response), anyone interested in Judaism in the modern world should read this piece.

Posted by Zachary Silver at 7:10 AM No comments:

Reading material and a video, to boot

Here's an amusing (perhaps hyperbolic, though maybe not) sociological analysis of Jewish life on the Upper West Side of New York.
(Footnote to Shoshie for finding this)


And the video for Hadag Nahash's best song on their new CD — עוד אח אחד (another brother).
The song is a cover of a song written by rapper "Fishy HaGadol" and speaks about the endless cycle of violence, the refrain stating:

In addition to being a beautiful song musically, with poignant lyrics, this video socks the viewer in the gut toward the end.
(Footnote to the Peaceful lion on this one)


Posted by Zachary Silver at 11:43 AM No comments:

During college, I took both of the classes that Paul Hendrickson taught. English 145 and English 155.

English 145, Advanced Non-fiction Writing, in that nook of a room at the end of the second floor. Filled with easy chairs and sofas. Three non-fiction pieces, the first a personal memoir, the second two — go out and find the stories and show their characters.

English 155, Writing in the Documentary Tradition, just up the stairs and to the left — around the table. Follow a topic, a person, a place for an entire semester. Own the experience. Bring it to life. I chose the Penn basketball stadium, the Palestra, "College basketball's most historic gym," as many know it.

Hendrickson went by PH — from the first e-mail he wrote to the class, colloquially among the students and straight to his face. He was a writer. Yes, teaching at a university. But a writer first and foremost —none of the formalisms, please.

After thirty years at the Washington Post, writing features, a few books along the way, he found his way to Penn to teach.

"You need to feel the words between your fingers," he'd say, rubbing his thumb and fore-finger together. "You feel it?"

Her award-winning piece about Penn's high-stakes poker players. Her documentary following a resident at the Hospital of the University of Pennsylvania. The DP feature on Communications Dean Kathleen Hall Jamieson, which underwent revisions in that nook on the second floor of the Kelly Writer's House.

I took both of PH's class with Ashley. We served on the Daily Pennsylvanian's 119th board of editors together.

In a class filled with writers who had to apply to get into these non-fiction workshops, where we work-shopped our pieces on a weekly basis, she blew us all out of the water.

During one of the final classes of our Doc Seminar, Eliot Sherman said, "Parker — you're going to make it."

We haven't spoken since graduation in 2005. But her cover story in the Times Magazine rocks my world.

Well done, Parker.
Posted by Zachary Silver at 8:54 AM No comments:

A few Hebrew vocabulary words for your Sunday afternoon.

This one, courtesy of Guy.

The word for making a u-turn in Hebrew is the same as the one for "horse shoe" or "hoof" — naturally enough, the shape of the u-turn.

Israelis are known for saying what's on their minds, cutting through the polite platitudes which are common in America. Let's cut to the chase – בוא נדבר דוגרי.
Posted by Zachary Silver at 7:16 AM No comments:

Reading through The Forward, I happened upon this article by my friend and former roommate Jonah Lowenfeld. As you will quickly see, anything he writes is worth reading.

Remembering Kent State as an American Tragedy With a Jewish Face


KENT, OHIO — At 11 p.m. on May 3, a group of marchers will begin a candlelight vigil at Kent State University in Ohio to recall what is for many a distant echo from another era.

COURTESY OF KENT STATE UNIVERSITY
‘The Day the War Came Home’: Clockwise from top left, Allison Krause, William Schroeder, Sandra Scheuer and Jeffrey Miller were killed when Ohio National Guardsmen opened fire on a group of unarmed students and bystanders during campus anti-war protests on May 4, 1970. The shootings came after some students hurled rocks at the soldiers.
The killing of four unarmed students by members of the Ohio National Guard during a national wave of campus protests against the Vietnam War will have its 40th anniversary this year. And as they have every year since 1971, those honoring the students’ memory will circle the area where the demonstrations took place and end up in the parking lot where they were killed.
There, the gathering will hear students from the campus Hillel recite the Kaddish.
The Jewish prayer for the dead has been recited regularly at this annual event since the early 1980s — a reflection of the fact that three of the “four dead in Ohio” famously memorialized in song by Crosby, Stills, Nash & Young were Jewish.
Neither at the time of the shootings nor since has anyone looked closely at this odd fact — one that seems odder still for a campus where Jews have never made up more than 5% of those enrolled. Karen Weinberger, a sorority sister of Sandra Scheuer, one of the slain, recalled that back then “it wasn’t anything that was really of great significance. The significance was the fact that you had four students that died and nine that were injured.”
But if the shootings themselves were not a Jewish tragedy, the first commemorations of them were overwhelmingly so. “What happened that day was not a Jewish event,” said Tom Sudow, an alumnus who transferred to Kent State in the fall of 1973. “The response to May 4 in a lot of ways, though, became a Jewish event.”
Today, the killings are memorialized by no fewer than four separate markers at and around the site. They convey official recognition of what happened there by everyone from the campus administration to the federal government, to the Ohio Historical Society. But in 1971, as the first anniversary of the killings approached, there were no plans to do anything to note the date’s passing. The war in Vietnam was still raging, Richard Nixon was still president, and Kent State seemed unwilling to confront its recent bloody history. “It wasn’t, ‘Cover up,’” Sudow recalled. “It was, ‘If we ignore it, maybe it will go away.’”