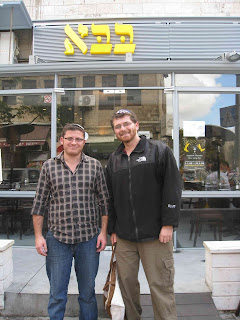 Yesterday was the annual Emek Refaim Street Fair BONANZA (I believe that's the technical name they gave it).
The restaurants all had stations in the street and street stands sold a healthy combination of trinkets and expensive art. Essentially, every American living in Jerusalem showed up, and 75% of Israelis, as well.

People at the fair represented a veritable pu-pu platter of people in my life, if you will. And I think you will.

Toward the end of the night I sat down at a restaurant called Baba with Sarah, Gabi, Kupps, Hannah, Hackit and Ari Berkowicz. I should note that I look quite like the owner. Many of the מלצרים (waiters) had a good time with the comparison, particularly when Sarah suggested that we were cousins. ("WOOO, WALLAH. B'emet?" was a particularly amusing response).

Here is a picture I took last year with said owner (Yoni). Thoughts?

Running into various people from my present and past (and future, for that matter) was joyous to the max. Lots of giant hugs, "how have been"s?, "You must come for Shabbat"s, and a chorus of "Shannah Tovah"s echoing throughout the night.

As I write this, Rosh HaShana is approaching and enveloping Jerusalem. This is clearly manifested in the food selection at shuk, the cards everywhere and even in the fact that you get an extra .25 liter free in honor of the hagim when you buy a six-pack of 1.5 liter soda/pop (I will note that I am weening myself off said products, however).

More than these physical products, though, I take most to heart that every time I leave a conversation, whether with a friend or at a store, there is an exchange of "Shannah tovah" as we part ways. While the chaos of the Israeli infrastructure makes buying stamps and installing internet are multi-step processes, and are quite frankly absurd, the particularism embedded in the notion of "כל ישראל ערבים זה בזה'' (all Jews are responsible for one another) tangibly illustrates itself during this time of year, giving me cause to smile.

Shannah tovah.
Posted by Zachary Silver at 7:57 AM