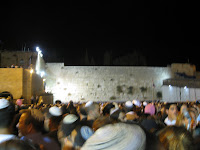 My alarm was supposed to go off at 3:45 in the morning on Friday morning.

So at 4:00 Baldachin called and I bustled down the street to meet him and Chaim Cutler and we headed to a Kurdish Shul in Nachlaot (a neighborhood right next to the Shuk) for night Slichot services.

I've come to love Sefaradi/Eidot Hamizrach (Spanish descendants/Middle East communities) slichot. They're catchy tunes, beautiful poetry and after more than a month of saying them, the communities take ownership of them.

At the end of the service, there were blasts of the shofar. According to Rabbinic tradition, the sounds of the Shofar are supposed to sound like human cries, like wails.

This shofar did. And at that moment I decided I was going to head back for Neilah. I wanted to hear this man rock out with a tekiah gedolah at the end of Yom Kippur.

Following a relaxing and enjoyable Shabbat in Tel Aviv with my favorite spokesperson for the IDF (Hackit), I headed back to Jerusalem and a group of us headed to the Kotel for midnight Slichot. Turns out a few other people had the same idea.

The line down to the Kotel plaza went all the way down through the Shuk in the Muslim quarter, backing up to Sha'ar Yafo (for those that aren't familiar with that geography, let's just say that's a long way). Once we finally got down to the plaza, the entire country was standing in every cardinal direction. (See the pictures to see just how many were there).

The slichot were blasting over a series of loud speakers and the entire plaza joined in. People from all over Israel joined in. Thus far there have been a couple of "only in Israel" moments. This was one of them.

Perhaps none more, though, than when we were leaving Aliza's apartment before the fast, and an elderly woman opened the door precisely as we were walking down the stairs and wished us "gmar chatima tovah." It was pretty cute.

The entire country shuts down for Yom Kippur. People in white empty into the streets, kids take to their bikes and declare that the roads belong to them. After Kol Nidre, 92 percent of Americans in Israel stood at the crossroads between Rahel Imeinu and Emek Refaim. Standing, laughing, having a good time.

For Neilah, I headed back to what I will now dub "my" Nachlaot shul. And, man, do they love their slichot. A full month of Elul, plus 8 days of Tishrei, and they kept going. During Mincha and Neilah, they again said slichot. One more chance, I suppose.

Jonah (the book) was chanted to a unique nusach (tune), though anything would have been new for me, quite frankly. Beautiful.

And finally we got to the Tekiah Gedola blast at the end.

Because instead of a tekiah gedolah, it was a teruah gedolah. A series of short blasts which were somehow woven together in a fluttering call.

And after that, cars began to empty out back on the streets.

Next up, the festival of booths. Want more pictures? That's what I thought. 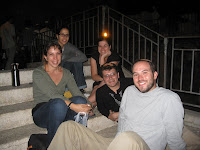 Posted by Zachary Silver at 6:34 AM