Parashat Va'era: Heschel, King and the Legacy of Hardened Hearts

A sermon given at Congregation Temple Emanu-El, Reno, NV:
Friends, at the first conference on religion and race, the main participants were Pharaoh and Moses.
And Moses' words were, "Thus says the Lord, the God of Israel, let my people go." While Pharaoh retorted, "Who's the Lord that I should heed his voice and let Israel go? I do not know the Lord. I will not let Israel go." The outcome of that summit meeting has not come to an end. Pharaoh is not ready to capitulate. The Exodus began but is far from having been completed.
Rabbi Abraham Joshua Heschel uttered these words at the Conference on Religion and Race in 1963. 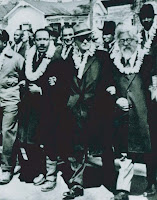 Walking by Revelation/Stopping to Witness Revelation

Every day upon entering the Jewish Theological Seminary, I walk under the institution's seal, an imprint of the burning bush from Sh’mot 3:2, and the words, “And the bush was not consumed.” 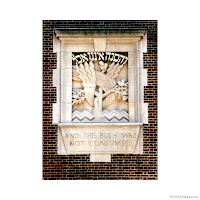 Victor Brenner first designed the seal in 1902, corresponding to the ascendancy of Solomon Schechter to be chancellor of the Seminary. Brenner would become famous in 1909 for designing the imprint of Lincoln on the United States penny. With the reorganization of the institution in 1902, JTS sought to impress on the Jewish community that Jewish learning and living would live on into the future on American soil, never being extinguished.
This week we read of Moshe walking along and bearing witness to this ultimate wonder of God (3:1-4):
1. Now Moshe was keeping the flock of Yitro his father-in-law, the priest of Midyan; and he led the flock to the farthest end of the wilderness, and came to the mountain of God, unto Horev.
2. An angel of Adonai appeared to [Moshe] in a blazing fire out of a bush. He gazed, and there was a bush all aflame, yet the bush was not consumed.

3. Moshe said, “I must turn aside to look at this marvelous sight, why doesn’t the bush burn up?”

4. When Adonai saw that he had turned aside to look, God called to him out of the bush: “Moshe! Moshe! He answered, “Here I am.”
Look closely at the verses. Moshe does not recognize this revelation of God until the angel speaks to him out of the Bush. He is walking along, and there happens to be a burning bush on his walk past Horev. Had there been no voice, it seems very likely that Moshe would have failed to notice this epiphany. Humans go through life seeing through a dark glass. We often walk right by the revelation of God, whether walking through the desert, or down Lakeside Drive. Sometimes we hear a still, small voice, and sometimes we don’t need it. Often we just pass on by.
Michael Fishbane, author of Sacred Attunement, describes this event as an “awakening of habitude, and through it we may perceive a first intimation of what covenant attentiveness might mean. It occurs in the wilderness, amidst the labors of sustenance and routine, in an endless terrain of sameness” (52).
This is an individual moment, the covenant of one person with God. The communal covenant will happen at Sinai.
“Hence the first experience of Moses only provides a model for theological reflection about the primariness of covenant living in one’s personal life; and it is only with Moses’s second experience that we can derive some insight into the way a covenant may also establish a social structure for God-centered living. It is the foundation of this form that is so primary for biblical religion and theology; and its ongoing revision is of absolute centrality for Jewish theology and its various life-forms” (55).
Through the model of explicating Torah, Fishbane outlines a lens of attuning to the divine in our lives. Covenant exists both in individual and communal contexts, sometimes overlapping, others not.
As we journey through the parasha this week, allow yourself some time to notice moments of revelation, those that call out to you and also those that you might have walked by.
Posted by Zachary Silver at 10:08 AM No comments:

Finding the beginning of Parashat Vayechi is a harder task than any other parasha in the Torah. It is the only parasha that does not have a break between it and the previous one, dubbed in Hebrew a parasha setuma, a “closed parasha.”
Like in English rhetoric, the physical separation in the Torah between parshiot typically represents a thematic break of some kind. But why no break this week?
Rashi (Northern France, 1040-1105), citing the midrash, says that the first pasuk of Parashat Vayehi begins on a negative note, and thus the two parshiot are elided together in the writing of the Torah. We read in Breishit 47:27-28 (the end of Parashat Vayigash and beginning of Parashat VaYehi): 27 Then Israel lived in the land of Egypt, in the land of Goshen; and they got them possessions therein, and were fruitful, and multiplied exceedingly. 28 And Jacob lived in the land of Egypt seventeen years; so the days of Jacob, the years of his life, were a hundred forty and seven years.
Rashi suggests that because Yaakov’s death has been foreshadowed, his descendants blocked (nistamu) their eyes and hearts from the upcoming slavery that would await them. Another interpretation, Rashi says, is that Yaakov attempted to tell the people of Israel that his days were numbered, but they prevented him from doing so (nistam mimeno).
Common to both of these interpretations is that form follows function: just as Bnei Yisrael did not want to hear the negative news, the physical structure of the Torah itself does not want to begin the parasha on such a foreboding note.
Last week in shul, I heard Rav Benny Lau of Beit Knesset Ramban in Jerusalem add another interpretation to Rashi, dedicated to the memory of his uncle. He suggests that we have a parasha setuma in Parashat Vayehi not because of the beginning of Parashat Vayechi, but rather because the final pasuk of Parashat Vayigash speaks of the children of Israel becoming rich and multiplying while in Goshen. That was never supposed to happen. Yaakov’s children were supposed to make a quick trip to restock the food supply and then head back to Canaan. But they became preoccupied with the momentary wealth of this foreign land, ultimately being seduced by it. It would only be a matter of time before a Pharaoh “who did not know Yosef” would rise over the land of Egypt.
Rav Benny Lau represents the creative religious energy that is so refreshing with each and every visit I make here. He delivers each dvar Torah with passion and humility, packed with content, with a take-away connected to the cultural currents of the day. He is a model to me for what it means to live a committed Jewish life fused with lived experiences of the real situations that surround him. He emphasizes the need to build the state upon the values of our tradition, of crafting Medinat Yisrael that lives up to the deep morality entrenched in the Torah.
During a week of Jewish infighting in Jerusalem and Bet Shemesh, I want to elevate Rabbi Lau’s model of religious passion and commitment to the fullness of Jewish expression in the Jewish state. Such creativity must shine forth during this nadir of sinat chinam (senseless hatred) among the nation of Israel.
The Rabbinical Assembly of Conservative Judaism recently created a website devoted to spreading the light of Judaism for all to see. In the midst of a group of Jews spreading darkness by dressing up in concentration camp uniforms and yellow stars, this message of the Rabbinical Assembly shows that so many Jews live a life committed to bringing the light of Torah into the world. Please consider adding your own pictures to the site.
As we learn from the parasha setuma between Parashat VaYigash and Parashat VaYehi, we do not end or begin a week on an ominous note, on one of destruction. As we finish the book of Breishit this week, let us bring the light of Torah, of Jewish creativity, with gusto into the world.
Posted by Zachary Silver at 9:44 AM No comments: