Annie Lewis on becoming a rabbi

My friend Annie Lewis recently put words to paper on her growth into the position. My writing teacher in college said that with good writing, you can feel the texture between your finger tips. "You feel it?" he'd ask.

You be the judge here.

This was published on the Lilith Magazine Blog and seems to be part of a series.

Letter from Jerusalem:  Listening on the next generation of Conservative women rabbis

“Get yourself a teacher, acquire for yourself a friend.” – Pirkei Avot 1:6
Blessed are You, God, who clothes the naked. My mother’s closet is full of clothing from various eras of her life. Suits hang in every jewel-tone from decades of shul-going. She has even saved her Bat Mitzvah dress, yellowed lace with patches of pastel. When I was younger, I used to love playing dress-up in her closet, awaiting the day I would grow into her clothes.
Among the diverse discussion topics when a group of women rabbinical students gathered in Jerusalem living rooms this past year was the contents of our own closets: how we see ourselves and how we are seen; the ways we choose to cover and uncover; the garments we have inherited and those we have taken upon ourselves. My hevruta (study partner), Kerrith Solomon, and I convened this group of women from the Jewish Theological Seminary and the Ziegler school so we could talk with our peers about things we have not yet had safe space to explore within our schooling, reclaiming and exploring our identities as women on our paths toward the rabbinate in the Conservative Movement.

People have spilled large amounts of ink, virtual and tangible, about the recent conversion bill which hit the Israeli Knesset (Congress) floor, a law which would give designated Israeli Orthodox courts the sole rights over conversion to Judaism, and hence hold a monopoly over the age-old question of "who is a Jew" (certainly in reference to immigration to Israel).

The news left the banter of the Jewish world with Alana Newhouse's NYT Op/Ed; it continues to flow through the pages of the Jerusalem Post, HaAretz and every Jewish blog I've encountered thus far.

But my friend Jonah Lowenfeld has provided the best analysis I've seen thus-far. He outlines the politics of how the bill once really was out to help Russian immigrants gain status as Jews in Israel but turned to a political barnstorm of attempting to buy Charedi votes, giving political muscle to Rabbi Shlomo Riskin of Efrat and beyond.

If you read one article on the topic, this is the one to read.

It appears that the bill has been tabled until the next session of the Knesset, in no small part due to the outpouring of letters from Diaspora communities to PM Bibi Netanyahu (upwards of 50,000 — 25,000 through the Masorti website, alone).

Haven't written yet? Make it happen.
Posted by Zachary Silver at 10:30 AM No comments:

Israel and the Diaspora — Embracing Tension

An introduction that I gave to the haftarah reading today at Congregation Beth Judah  in Ventnor, NJ.
Today in this second of three haftarot of admonition, recited during the three weeks between the fast of the 17th of Tammuz and the destruction of the 9th of Av, we read the excoriations of the prophet Jeremiah.
We read of a people that has no concept of Wonder. Who has so quickly forgotten of being led through the wilderness. Who has turned to other Gods and prophesied by the them. Who has turned to idolatry in every form possible.
Shimu dvar Adonai, Jeremiah implores the people. Hear the word of God.
The people have not only forsaken God, but also created new cisterns which cannot hold water.
As the Hebrew idiom goes, ein mayim eleh Torah. Water is known exclusively as Torah. The people have restructured their entire world of following the Torah with a new, seemingly improved worldview. But they have done so with leaky plumbing!
During these three weeks of rebuke, we approach a day where we commemorate the destruction of the first and second temples, but also calamities in each generation. We read in Massechet Yoma of the Babylonian that the Temples were destroyed because of a breakdown in civil society, there was unchecked Sinat Chinam, acts of Senseless Hatred. Moral guidance stood in anarchy.
We read in today’s haftarah about ancient idolatry. So to are we conscious of modern day idolatry. Not in the form of bowing to idols, to offering incense to an iron, bronze or stone statue.
But the idolatry of paying more attention to a bright screen in our pockets than the people across the table from us. The idolatry of  knowing the details of the contracts of three basketball players rather than honoring the vows in the marriage contract on our walls. The idolatry of when our hearts are stirred with more wonder by the pyrotechnics of Pentium chips than the crest of the sun making its way above the horizon line of the Atlantic Ocean each morning.
Where are those Gods you made for yourself? asks Jeremiah at the end of chapter 2.
Let them arise and save you, if they can, in your hour of calamity. For your Gods have become, Oh Judah, as many as your towns!
But don’t despair, we skip to chapter four of Jeremiah to conclude our haftarah on an optimistic note. If the people Israel returns to God. If it does not waver, then nations will bless themselves by the nation and praise themselves.
As we approach Tisha B’Av, we listen today to the scolding of Jeremiah, rebuke toward his generation and a message for us, as well. It’s a warning bell. Undergo Teshuva. Be aware of your actions.
Posted by Zachary Silver at 7:11 PM No comments:

Israelites stop along the way for Ice Cream

Reading today's parasha, I noticed that one of the stops that the Israelites make on their journey is Yotvata. YOTVATA!


They stop there, then they camp there. 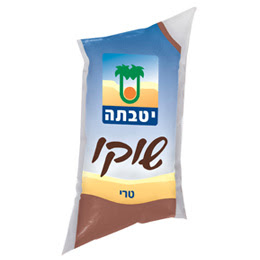 (I'm aware that this isn't the actual Yotvata. Please laugh anyway. Thanks)
Posted by Zachary Silver at 7:01 PM No comments: