First graders are among those we have to thank for today's Milot HaYom.

The day began with a trip to the French Hill neighborhood of Jerusalem to visit a "Tali" school, an elementary liberal Jewish religious school. We spent the morning in a first grade class room, in tefillah and the corresponding class about the prayer Modeh Ani. It will amuse some that Israeli children sing along to the Craig Taubman version of Mah Tovu.

When the teacher asked the class what they are thankful for, one girl said she was thankful for the trees for giving oxygen.

First grade knowledge of photosynthesis (on a base-level or not) impresses me. Well done, dude.

And thus, we begin today's milot hayom with oxygen and carbon dioxide.

הכדור בידינו (hakadur b'yadeinu): Literally, the ball is in our hands. But kadur is also the word for the world. The phrase sounds a lot like "the ball is in our court" — I love basketball metaphors. But give it an environmentalist flare and it means "the future of the world is under our control"

רגע לדעת, רגע לגעת (rega lada'at, rega laga'at): "A moment to think, a moment to touch"; this is the theme of the zoological curriculum in the school. The students learn about various animals and then head down to the basement to the ג'ונגל ("jungle") to interact with various animals.


Below is the set of principles by which the school runs. Attached to each guideline is a corresponding quote from the Jewish canon.

Such a sign, in my mind, illustrates an ideal vision of what it might mean to structure a society according to religious principles. In future posts, I'll explore the moral imperatives, or lack of them, for religion in the modern world. This is certainly a point along that path. 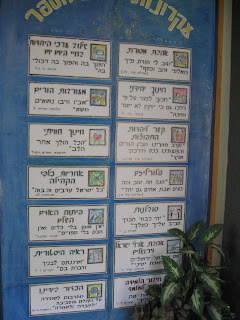