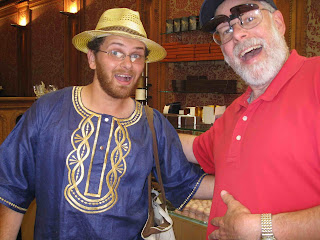 Last summer, on a teenage work and educational trip to Uganda with American Jewish World Service, we got together several times a week to check in and debrief about different issues going on within our group, our relationships with the community and beyond. A check-in. Jake affectionately called this “circle time” — he wanted more of it, and asked almost every day when we would have said “circle time.”

Everyone would scramble for a spot along the wall of the opening to our building; several would grab a mattress and in turn there would be a battle for a seat there, as well. These were the prized spots — compared to the stone floor, of course.

During one of said “circle times,” Maya invented a word. Everyone in the room, she noted, was awkward in some way. And in each case that was what she admired most about that person — the quirks, ones you get to know really well when spending 24 hours a day together, living in the same dorm, using the same everything for daily life.

So the term itself was misplaced. It wasn’t that people were awkward. Or maybe it was. But we should embrace that fact. That awkward should be trendy. And hence, we should all love the fact that we were trawkward.

According to Rabbinic interpretation, Rosh HaShannah celebrates the birthday of the world. At least, this is the way it is often portrayed. As we say six times throughout the Rosh HaShannah liturgy, “Hayom Harat Olam,” today the world is pregnant. Specifically, Rabbinic thought places the creation of the first human on the first of Tishrei, on the first day of Rosh HaShannah (Midrash Vayikra Rabbah 29:1, parallel text also in Pesikta d’Rav Kahane, Piska 23). The Midrash notes explicitly that creation began on the 25th Elul, five days prior.
With this understanding, if a tree falls in the world and no one is there to see it, sure it happened. But it is all but irrelevant.

Of course, there is a distinction between the Midrashic notion of Rosh HaShannah being the birthday of humanity and of the liturgical representation of humans not yet being born. Yet the image also expresses the untold potential of human engagement with the world — beginning on this day, of seeing the tree fall and planting a new one in its place. As Reb Shmuel of the Conservative Yeshiva posed last week, do a 15 second thought experiment: “Imagine a world without humanity. What are the sensory emotions you envision?”

Fundamental to celebrating the potential of humanity is crowning God as sovereign of the universe. Humans operate within a wider system of interaction; relationships within each individual, within particular communities, within wider universal communities, within the world and all of creation, with God. The crowning of God, seen explicitly in the Malkhuyot section of Musaf (emphasized through the enthusiastic tune of Keter Melukha) illustrates a fundamental order of the universe, one guided by the ideals that will create the world that humans want to see. Only through such a crowning of God, of living and engaging with the ideals set forth through vital religion will humans live in the world that is so often envisioned.

Rosh HaShannah celebrates the potential of humanity, its interaction with the entire scope of creation. In doing so, I think back to the wise statement by the curly-haired red head during circle-time last summer (I note this because Maya’s hair is wicked cool wherever you are in the year, but it particularly sticks out in Uganda). As we honor humanity, we also should be that much more honest with the core of ourselves, our vulnerabilities, which in themselves make us human. I'd like to propose that by doing so, we are fulfilling the edict of Deuteronomy 30:19 to "choose life," ובחרת בחיים.

We all have quirks and too often hide them; in reality, they’re often best of each of us. What is it that defines each of our trawkwardness?

Last year while reading over some of Rabbi Abraham Joshua Heschel’s essays, I came upon a striking parallel between the 20th century philosopher and activist and a speech given by Senator Matt Santos of the West Wing:

Because we're all broken, every single one of us, and yet we pretend that we're not. We all live lives of imperfection and yet we cling to this fantasy that there's this perfect life and that our leaders should embody it. — Santos, 2162 Votes, Season 6 Finale

We are all failures. At least one day a year we should recognize it. I have failed so often; I am sure those present here have also failed. We have much to be contrite about; we have missed opportunities. The sense of inadequacy ought to be at the very center of the day. — R. AJH, "Yom Kippur," found in Moral Grandeur and Spiritual Audacity, ed. Susannah Heschel

Rosh HaShannah is not a day of contrition, Yom Kippur is. But in celebrating our own lives and those of whom we both know and do not know, in crowning God Melekh, we also recognize our fundamental humanity, one which has holes. Many of them.

The common person thinks it is a disgrace for her to use broken vessels. But God does not (share this opinion). All of God’s interactions are with broken vessels, (as it reads) “God is close to broken hearts” (Psalms 34:19); “(God is) the healer of broken hearts” (Psalms 116:3); “A broken and a contrite heart, God, You wilt not despise,” (Psalms 51:19). For this reason Hosea warns Israel and says to them, “Return, Israel, unto the HaShem your God; for you have stumbled in your iniquity” (Hosea 14:2).

Humans are fundamentally flawed and the Midrash suggests we should not only be comfortable with that fact, but that an attempt to cover this up is idolatry. God wants us to be broken, not because we try to be at any particular moment, but because that was how we were created. Yes, of course there’s the oft-quoted statement that we are broken so we can in turn do teshuvah; perhaps you prefer Uncle Ben’s statement in Spiderman.

But this idea goes well beyond that. We are vulnerable because that is who we fundamentally are. On Rosh HaShannah, as we celebrate human potential in the world, of building the world we want to see, now of all times we embrace this cardinal aspect of our selves. “Because we’re broken, every single one of us, and yet we pretend that we’re not.”

This holiday season I am particularly conscious of the love of my friends and family. I feel blessed to interact dynamically with the people I love, celebrating and laughing, often exposing our own vulnerabilities. I only wish I would guard myself less.

May this be a year of challenges, of joy, of integrity, of holes. May it be a year where we are not afraid to be ourselves, where we embrace a life of quirks and trawkwardness, of our fundamental humanities.

Posted by Zachary Silver at 6:13 AM