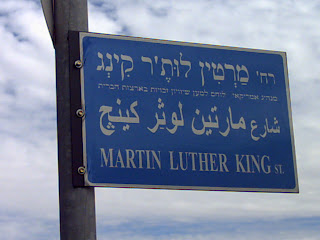 A new street in Jerusalem, perpendicular to Emek Refaim.

Yesterday was Martin Luther King Day in America, a day to honor a modern prophet, a hero in American history and in the history of Civil Rights, writ large.

Below are comments by two professors at JTS, upon hearing of Dr. King's assassination. Eulogies only tell part of the story of a person's life. These are no exception.

Take a few minutes to read the words about King of these two scholars and leaders of American Jewry, the effect he had on all Americans.

Seriously, click on them. They are the original documents from which the scholars read.

Below are some excerpts from the texts:

It is the loss of this hope which has brought dismay to so many in other lands, as they look over our country today, regarding its spiritual prospects as bleak. America has amassed great power — greater than any State in history. But in the process it has lost the spiritual vigor and leadership which it possessed in the days of its founding fathers. Dr. Martin Luther King was its opportunity to regain this leadership, as the moral guide to the World; precisely the same opportunity which Abraham Lincoln offered in his day.

Is it not strange that both of these spiritual heroes of America, whose moral greatness transcended all differences of color, ethnic background, creed and nationality should have been cut down before their time, through an assassin’s bullet.

“When a Sage is lost,” asks the Talmud, “where can we find his replacement?” Each of the many tasks of Martin Luther King, Jr., will be assumed by others. But who can combine in himself all the moral authority, all the spiritual promise, all the wisdom, all the greatness, who had become concentrated in him, even before he had reached his fortieth year. America does well to mourn its great loss; the world joins it in this sense of bereavement.


Anyone’s death is a tragedy. The death of a man like Doctor Martin Luther King is a catastrophe. He has gone up to heaven in a chariot of fire in the midst of a storm. We can best honor him by converting the storm into a cleansing rain which brings new life and reconciliation. There should now roll across this land an irresistible wave of readiness and determination to men the wrongs we have done, a dedication to justice, generosity and boldness of spirit. Doctor King dared to dream the dream that this might take place. But, as he so prophetically said just a few days ago. He had only seen the promised land from afar from the top of the mountain. Perhaps with God’s help, his sacrifice will break the hardness of heart with which we are afflicted so that his people will finally inherit the land of promise. Is there any greater tribute, is there any greater meaning than that his death should bring us all closer to life. The light has been extinguished, the voice has been stilled, but the memory is here among us. When — because of it — we draw the strength and gain the wisdom to do what is right then indeed — as the Bible assures us — the memory of the righteous will be for a blessing.

-R. Seymour Siegel
Posted by Zachary Silver at 2:53 AM