Where did you go to school? Solomon Schechter North Face 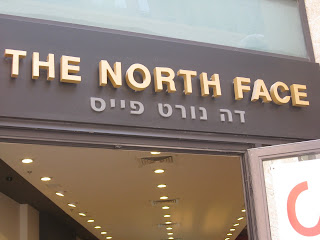 The new North Face store in Mamilla Mall, Jerusalem. (They transliterate "The" as "Duh")

My friend Ilan is an Israeli tour guide. A story from him:
We were sitting in Caesarea waiting for the movie to begin and this birthright group came in and sat in front of us. The father of my family asked me: "What's North Face? Is that like a Zionist youth group in the US?"


Indeed it's true, a youth group of young Jews touring Israel might as well be sponsored by North Face. Except that they pay for them. I bought mine in X'ian.

And sure enough, what do Jewish Young Adults like? Number 95 here we are. Shoutout to Sarah Beth Berman for the reference.

It should come as no surprise that Jews conspicuously wear North Face jackets; the two make an adorable dyad. In fact, this fashion trait is more indigenous to the JYA, than to the non-JYA. For example, one can see the JYA wear a North Face jacket on a spectrum of disparate occasions: on the way to yoga class with a double macchiato in hand from Starbucks, returning empty handed from a JDate speed-dating night, or sliding down circuitous ski slopes with the family in Aspen, Colorado.

The appeal of the North Face doesn’t just dig deep into the JYA’s yuppiness, but also stems from a need to feel edgy. Let’s examine the brazen JYA: she audaciously tests the limits of practicality unlike the non-JYA by wearing a light spring-appropriate gray fleece jacket with “North Face” emblazoned on the left breast in the frigid death of winter (exceptions: LA and Miami). And let’s not forget her year-round uniform of transparent leggings and ruffled scarf beneath that Denali fleece. Absurd, but nonetheless JYA and cute!

North Face jackets have become the staple ingredient to any JYA’s sense of modern Jewish style, akin to circumcision: Every Jew is required to get it, irrespective of personal choice. In fact, without one, or admission to not owning own, elicits horrified looks and awkward silences among fellow JYAs. The tradition of Denali Fleece, worn 9 months out of the year, has become sacrosanct and no JYA is a member of the tribe until that North Face is on his/her back loud and proud.

Suffice it to say that without the JYA consumer, it is possible that the North Face company would experience the same macabre fate as Lehman Brothers. Fortunately, the North Face can back on Jewish Adults and even Jewish Elders if the JYA fad was to subside. It is not uncommon to see JYA and family all sporting a North Face Denali fleece or the apparel’s derivative ilk like sport gloves and down jackets. Consequently, donning a North Face has become a Jewish universal for both JYA and JA.

Posted by Zachary Silver at 6:12 AM