I love chocolate and cheesecake... 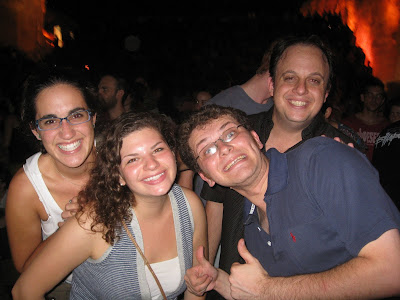 ...and Israeli rock concerts.
Across Jerusalem there are postings with concert announcements. Ari recently said, "There's going to be one time when you don't stop at one of those signs."
Not sure it has happened yet.
A trip to Yam HaMelach (Dead Sea) was number on my list for the Sukkot break. So we made it happen.
Yesterday Guy, Kupps (Guy calls her Poochy), Hannah and I headed down Kevish (Route) 1 to the Dead Sea. Directions were a little fuzzy from the get-go, but there's only one road along said Dead Sea. So we headed that way.
We were pretty sure we were on the right path, but just to make sure, we pulled to the side of the highway alongside another car which had also pulled over. Turns out this van had pulled over to let a sephardi family of three males pee off the side of the highway.
So we waited for a bit.
And then asked:
Do you know if Yam HaMelach is this way?
First guy: No (shaking head)
(second guy comes to the window) Us: Do you know if Yam HaMelach is this way?
Second: Em... (No).
(third comes to the window) Us: Do you know if Yam HaMelach is this way?
Third (I'm guessing the father): (shaking head) Lo Makir (not familiar with it)
Us: B'emet. Lo makir et Yam HaMelach? (Really, you don't know of the Dead Sea?)
Third: Lo
Good times. Lo makir...
We were on our way to Nahal Zohar, the Zohar Wadi — next to the Sea, in a valley with walls stretching toward the sky.
The concert was by Yehudit Ravitz and Gidi Gov, two of the premier and classic Israeli rock stars. Chances are if you know some of the classic Israeli songs, one of them sings it. 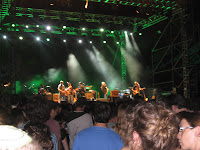 They sang most of them. שוקולד, ארבע לפנת בוקר, הילדה הכי יפה בגן, באה מאהבה, ארץ טרופית יפה to name a select few of the 3 hour concert.
But when Gidi Gov broke out in Inyan Shel Zman, the 2003 Nivo Zimriyah song, among other things, let's just say that Hannah and Kuppy went nuts. I mean, it's a good song in its own right.
Add some emotional attachment to it and — booyakasha.
Both artists captured the audience. Talk about stage presence. Everyone around us knew the words and you better believe I sung along. I'm quite certain we were the only Americans in the audience.
None of us stood still for the whole concert.
And as we were waiting for the encore to come back on (Yehudit singing בא מאהבה, for those keeping track at home), Guy said, "So nu, we going to see if there are tickets to the other one, too?"
We had been shut out of buying tickets online to the sunrise show on Massada that night. But Kuppy and Hannah had just purchased tickets for this one at the box office.
So we headed over there, too. And what do you know — TICKETS.
We headed up on the cable car and sat on the makeshift sets of cushions set up on the southeast side of the fortress. A short nap for each of us.
And then Meir Banai and Arakadai Duchin. It was a more subdued concert for the most part.
No hopping up and down, for example.
But again, beautiful music, a clear sky, with the sun rising to our left over the Dead Sea.
I try to avoid hyperbole. But on a scale of "1 to best night of concert/s ever," this was a 102.
For pictures... 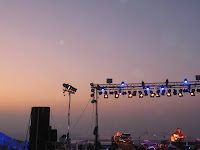 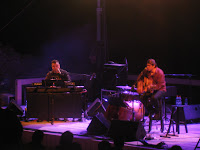 Posted by Zachary Silver at 5:51 AM