When you are not a mourner — Thoughts on Yom HaZikkaron 5770 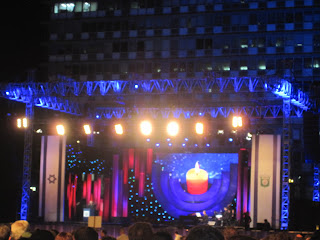 Last night the Peaceful Lion and I headed to Kikar Rabin in Tel Aviv  for the city’s commemoration of Yom HaZikkaron, the National Memorial Day for Fallen Soliders and Victims of Terror. Over the years, Israel has built a canon of poetry and music devoted to the memories of those that have died. The songs are slow, they invite the crowd to sing along. They often allude to other canonical texts from throughout the course of Jewish civilization. Sure there are the classics, but there are also enough to fill the radio waves for an entire day with very few repeats.

Sunday night’s tekes (ceremony) featured the best of Israel’s rock stars singing said classics in front of a standing-room only crowd in what equates to the town square. In between, the MC said a poem, the jumbo-tron played a clip of a family telling the story of their loved one who died. We heard the narrative from the sources, related to the intangible through poetry.
This morning, I went to the tekes of HaGymnasia HaIvrit, a high school in the Rehavia neighborhood of Jerusalem dating back to 1909. The school remembered 138 people this year. The MC formally welcomed us to the event, we again heard narratives, interspersed with music. And heard each of the 138 names.
Over the past two days, I’ve felt tugged in multiple directions, an outsider who does not have Israeli family, who thankfully does not have a personal connection to one of the narratives that play on television on every 4 Iyyar (I am aware of the calendar differences from year to year). But I am continually drawn to the importance and imperative of this communal narrative, of educating about it, as I relate personally to the civil religion of Israel through music, though stories of the common human, stories that have evolved to become a part of the National religion of the Jewish nation.
While sitting in the school courtyard this morning, I thought about what it means to force a nation to mourn. What it means to force individuals to mourn. Is this possible when people are personally connected to the event, whether family or otherwise? All the more so, is it possible when people are there without a personal story of their own that they are remembering?
The gemarra in Masechet Sukkah explicates the Mishnah’s statement “Shluhei Mitzvah peturin m’hamitzvah” (those who are on the way to do a commandment are exempt from performing [another] commandment). It assumes the general rule that “haosek bamitzvah, patur min hamitzvah,” one who is performing a mitzvah is exempt from another mitzvah (Sukkah 25a).
In the course of this discussion, we learn that a person who is tarid, worried or obsessed with something, is exempt from a mitzvah in the same way that someone who is physically performing a mitzvah. From here, we learn that the groom is exempt from Shema on his wedding night.
We also learn specifically that someone who is in mourning is not exempt from mitzvot, because as the gemarra describes, this mourning is tirda dirshut, voluntary distress.
I don’t think it’s only a post-modern reading to say that on the face of it, saying that a mourner “voluntarily” emotes, where the groom cannot help himself, is morally problematic.
But Rashi's (11th c. Northern France) commentary emphasizes why this is the case: despite the fact that the mourner is required to perform the physical mourning acts, he is not required to emote. (טירדא דרשות - שאף על פי שהוא חייב לנהוג אבילות של נעילה רחיצה וסיכה להראות כבוד מתו - אינו חייב להצטער.)

Perhaps this is because it is impossible to mandate someone to mourn emotionally. One can mandate physical action, which might lead to an emotional outpouring in turn. But not emotions.
Thankfully, I am not a mourner today in the technical sense of the word, halakhically or more abstractly. But on a day when the fabric of the world is shakier than normal, I greatly appreciate the foundational character of the tekesim across the country.
On a day when I certainly cannot force myself to mourn, the civil religion of Israel, the National religion of the Jewish people provides a structure which can allow for the necessarily different mourning of each individual.

The Israeli radio station Galgalatz is currently playing in my living room and soon I will head to the tekes maavar, the bridge ceremony between Yom HaZikkaron and Yom HaAtzmaut (Independence Day). There will be more music tonight and tomorrow of a decidedly different character.


Below is a video assembled from last year’s tekes in Kikar Rabin:

Posted by Zachary Silver at 7:08 AM